It's Only Rock n Roll...Hyde Park

Wembley stadium, London, on the 4th of July 1985, that was the first time I saw Bruce Springsteen and the E Street Band play live, the performance I witnessed that day was and remains the best live show I've ever seen.


Fast forward 27 years, 14th July, Hyde Park, London. Opening with a fantastic version of 'Thunder Road' as he had done on the bands first visit to London in 1975, Springsteen and his band of merry men and women set off on a 3 and quarter hours set of pure adrenaline filled rock n roll!

Some much loved people were missing, sadly no longer with us, in the shape of Clarence 'the big man!' Clemons and Mr. Danny 'now you see him, now you dont' Federici. Amazing that this band can still sound so good even minus those two hugely gifted musicians.
Although my wife and I have now seen the band on a number of occasions, this gig was made even more special by the fact that our daughter Mel was with us. Brought up on tales of the exploits and mammoth gigs of the legendary E Street Band, she had the opportunity to experience first hand the power and joy they bring to an audience, and they didn't disappoint. 'Born to run', 'Because the nigh't, 'Dancing in the Dark', Spirits in the Night', 'Born in the USA' among so many others all came and went in bursts of pure energy!
Springsteen was joined by Jon Fogerty to duet on 'Promised land', Tom Morello later joined the Boss for a rendition of 'The Ghost of Tom Joad' which was simply breathtaking. Then last and by anyone's standards, not least, Paul McCartney arrived onstage to rip through 'I saw her standing there' and 'twist and shout'! The sight of Springsteen and McCartney rocking Hyde Park will live with me and anyone else who was privileged to be there, forever! As this duo to end all duo's looked to be going into a third song...silence. The event organiser's had pulled the plug, afraid to lose their licence due to a curfew, the band had already played 30 minutes beyond the cutoff point. Shame on you Westminster council!
The ending didn't detract from what was a great performance from a true rock legend, I doubt we'll ever see his like again.

Lo and behold, PRSformusic actually replied to inform us that they are following up on our Australian TV royalties directly with APRA which is, I beleive, the acronym for Australasian Performing Rights Association, in which case, great news. It could also be the Australian Professional Rodeo Association, which isn't so great, to the best of my knowledge, they dont owe us a bean!

The new EP should be finished before too long, both of The Summats are now based back up in the North of England so hopefully this  should speed up production. Speaking of which, we have a very cool producer working with us on a track titled 'Can You Hear Me Now'. Fractured Calm, aka Danny Wyatt is putting the finishing touches to the track, looking forward to hearing the finished work. It's worth taking time out to check out some of Danny's work at http://soundcloud.com/fracturedcalm 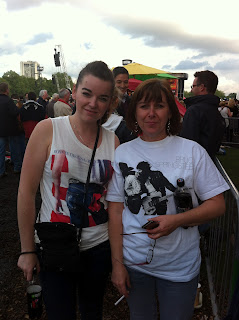