A weekend in the capital....

We visited London a few weeks ago, primarily to see The Fratellis at the Electric ballroom, but also to spend some time in the still, oh so very cool, Camden Town, here's the lowdown.
After a pleasant morning road trip from the North West to the South of England we arrived in London, capital of our green and pleasant land. Mistake number 1, don't drive into central London on a weekday, one reason, you'll be stung by the congestion charge and another, 25 quid a pop to park is no chuckling matter by anyone's standards. Well OK, if you are HRH you probably don't have to pay the congestion charge and your house is in the middle of town with a parking space, but if that's not you, don't do it! Park and ride in or take the train. I already knew all this as I tend to spend quite a lot of time there these days, so no excuses for me!

Following food and a couple of wet ones in O'Neill's, which is very fine establishment close to St. Pancras, it was back to the hotel for quick shower, change and out again, Took the northern line from Kings Cross, St. Pancras to Camden town station. The Electric ballroom is located at 184 Camden High Street,  a 30 second walk from the tube station, but even at this short distance it becomes clear that Camden is no ordinary town, the place was buzzing, people...some very strange people at that... were everywhere. The mandatory touts outside the venue to be ignored, one guy busking Oasis songs, quite random I thought outside of a Fratellis gig and lots and lots of very interesting shops.

We handed over the tickets and the ladies bags were thoroughly searched! We made our way down the ramp into the bowels of the venue, which incidentally, the local council keep trying to demolish, apparently they need to extend the tube station, seemed big enough when we passed through it! The venue has a bar off to the right of the stage and another one right at the back which we made for. The merch stand was selling t-shirts at 15 quid a pop, nice one Fratellis. Service at the bar was excellent, and with a smile, well done Electric Ballroom, good customer service doesn't take much and makes all the difference. 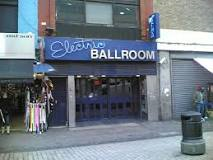 What a cracking place to see a rock band it is, all the attributes and atmosphere of a old school rock n roll hall which no matter how hard they try, the O2, Manchester Arena or similar places will never equal. The venue, which dates back to the 1930's, has seen a veritable who's who of rock n roll playing there, U2, The Clash, Phil Lynott, The Boomtown Rats, Joy Division, Oasis, The Smiths, Madness, Red Hot Chilli Peppers, Public Enemy, Blur, Supergrass, Garbage to name a but a small few. Wings and Led Zeppelin have also used the place as rehearsal rooms! fancy that! I was very impressed to say the least and very pleased to have added this awsome place to the list of rock venues we have visited.
The Electric Ballroom, which was originally known as the Buffalo club, dates back to the 1930's when it was purchased by promotional  legend Bill Fuller, Fuller, who among a number of other places of note, e.g. San Francisco's Fillmore West, owned the club right up until his death in 2008 at the age of 91. The venue has also always been popular with the local Greek community, using it to hold wedding recptions, George Michael's sister held her's there.
The Fratellis took to the stage at approximately 9pm, opening up and rocking the rafters with 'Henrietta' quickly followed by 'Creeping up the backstairs'. we've seen this band now on numerous occasions, in various cities, even various countries and they never disappoint, they ripped through the usual set taken from their first two albums with a couple of new tracks thrown in, or at least they were new to me.'Whisky Saga' and 'This Old Ghost Town'.
So, perfect venue, stomping rock n roll band ripping up the place, what more could you want. Well

actually, you could do without the coked up tools who insist on wasting money buying tickets for gigs, then spend the whole event out of their faces spoiling everyone else's enjoyment. After about 40 minutes of trying to see around a constantly swaying pair of no marks in front of us, we retired to the bar, where we could still see the band and have a drink at the same time, this was after the pocket dynamo known amongst other names as my Mrs, had delivered a few strategically placed digs to the ribs of the aforementioned tools, that's my girl! Now you may be thinking it was just because we are getting past rocking it up in the middle of a crowd, however, the three twenty somethings we were with followed us to the bar ten minutes later! Despite the issues with persons in the crowd, The Fratellis were brilliant yet again. Top band!

The next day was spent at Camden markets, what a treat this place is. We've always loved spending time walking around markets, but this is something else. Alternative fashion, vintage clothing, music, you name it, Camden Market has it in abundance. You could easily spend a whole day there walking around the stalls and shops. I picked up a vintage jacket for only ten of the Queen's English pounds, the label in it said made in Yugoslavia, can't get any more vintage than that, the country hasn't existed for over twenty years! The only dampener was the weather, it was lashing down, but as a lot of the markets are covered it wasn't too much of an issue. However, we will look forward to going back when the weather is fine to spend the whole day there.

After a hard days shopping it was only right to go the pub for lunch! We first tried the World's End which is a pub roughly about the size of a football pitch and worth a visit all on its own! Unfortunately the kitchen was closed for refurbishment and we were starving, so after downing a quick pint we headed across the road to the Camden Eye, a lovely pub right in the heart of things which has almost a goldfish bowl like feel, the curved high windows allow you to look out onto Camden High Street, people watching, as you sup a fine ale and tuck into a pizza from the wood fired oven. The customer service, food and atmosphere of the Camden Eye is first class. A top place to hang out, highly recommended.

Later on in the evenng we were passed on the street by Julian Clary nipping into Sainsbury's, Clary has had a place in Camden for many years and has retained it even after all his much deserved success, which kind of tells you how very cool this town is.

We really wanted to say hi to him as we've been big fans since way back in the dark ages.. or the 80's as we called them then, however, he looked in a rush and we didn't want to bother the guy so alas no pic for the blog.

We had dinner along Camden high street in a lovely mexican restaurant, Ay Caramba which has a really fun atmosphere, great food and lively typically mexician/Americas music playing. The place was packed when we arrived and we fully expected to be turned away as it was Friday night and didn't have a reservation, but the waiter asked us to wait for two minutes, then proceeded to squeeze us expertly into really nice table before bringing us sombreros to wear, which was a fun touch. Again first class customer service from another establishment in Camden. All in all, we thoughourly enjoyed our visit to Camden Town and will most certainly be back in the near future.

The Summats new single 'Nothings Changed' is out and available at all good online stores for download or streaming, very pleased to report that the feedback we have received on it has been first class to date. Nice to get a new track out there, there is definitely an EP to follow before too long! The track also marks the debut for the latest addition to The Summats line-up, Becky Dawson on backing vocals along with Sam. Watch out for a track titled 'You Could Be JD' featuring Becky on lead vocals which will be on the next EP

'Nothing's Changed'  was produced by Fractured Calm aka Danny Wyatt who has done a brilliant  job for us with the mix, please check out Danny's own work at soundcloud, we certainly hope to work with Danny again soon. The artwork for this single, was created by blogger extraodinaire, photographer and now budding artist  MrBen09,  we think it is an inspired piece of work. You can check out the video for the single at this link on Youtube

If you enjoyed the post or have listened to the new track, please leave a comment below, we would love to hear from you.

Until next time, take care and keep Smiling